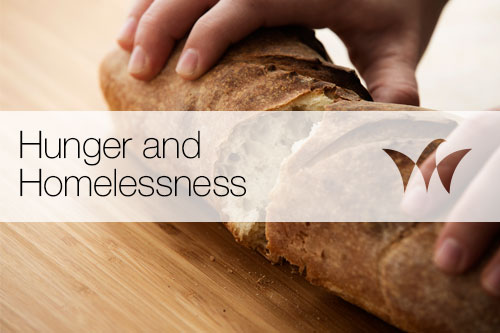 I chose the task of overseeing the hot drink station. I was offering milk and sugar to the homeless men as they made tea or coffee. There was a counter between us. I was on the kitchen side serving, and the men were on the other side receiving. It felt like a safe barrier between them and me.

It was my first time volunteering at the men’s winter shelter held at our church. One night a month around 50 homeless men arrive from San Rafael by bus and receive a meal and spend the night in the church recreation hall.

One man held an empty cup in his hand, and told me he had a cold. I suggested he have tea instead of coffee. He was an older man with sparkle in his eyes. I said he needed honey with his tea.

“Sweetness helps everything,” I said.

I looked in a few of the kitchen cupboards and found a bottle of honey. I squeezed some into his cup and stirred it with a plastic spoon.

After all the men had gone through the buffet line, our assignment as volunteers was to serve ourselves and then sit and eat with the men. I was hesitant about this part of the assignment. I organized the tea and coffee station, wiped the counter, threw away empty sugar packs, and restocked the paper cup that held plastic spoons. I was afraid of the level of connection that eating a meal with someone might offer. The truth is, I liked having a counter between us.

When there was nothing left to tidy in the kitchen, I took a paper plate and went through the line. But I soon found an excuse to return to the kitchen. I searched the drawers for another set of serving utensils. Many of the men were sick, they had told me there were as I added honey to their cups of tea. Although volunteers were stationed at the buffet line, I had seen many homeless men serving themselves with the spatulas and tongs that rested beside the salads and pastas. I didn't want to catch what they had. And then I wondered if I could catch homelessness. I knew I didn’t want that, and then I wondered how we are all homeless on some level, searching for the cup of tea with honey in it that warms us from the inside out.

This is how I arrived at the dinner table--with my fruit salad, my mashed potatoes and my fear. What would I talk about? Our volunteer leaders had asked us to make casual conversation, to accept that some of the men would talk and some would not, but to try to make some sort of connection so the men might feel that they were welcome in our space. I chose to sit at a table with one of the head volunteers, Joan, and the first man who said he had a cold and was sipping his tea with honey.

I started talking about tea and how much I like tea. When I’m nervous, I’m capable of talking to fill space. There were four men sitting near me at the table who were eating and distant, but I continued on about how I make my children tea when they’re sick and how I make tea when I want a break from work and in the afternoon when I’m tired, and then Joan leaned in and said, "Kathleen sang a solo in church this morning. What song was it?"

Often when I’m asked to recall the name of a song, a person or a place, I freeze. My mind goes blank, and I can’t find of the answer. I know this about myself and have learned that I can think around the word, give someone else clues, and they can eventually name what my brain is hiding.

"I can’t think of the name," I said, "It was a song about a river and everyone goes there together to pray."

The tea-drinking man's eyes sparkled, and he hummed, "As I went down to the river to pray..." I recognized the tune and started to sing the words with him. The man to his left had a silvery white beard, bushy eyebrows and blue eyes. He started humming and nodding his head. The man on my right tilted his head and listened more carefully. Joan joined in too, and I could hear her singing. The man on my left, who had been distant when I was talking about tea, sat upright and stared at me. When I saw his piercing gaze, I avoided his eyes. A few more men gathered around the table and started humming. Some of the men began to sing a few words here and there. I could hear their voices coming in low and slow, like a distant memory returning. Something in their chests gave way--a breath, a sound, a bird in flight.

I looked again at the man on my left, the one who was staring straight into me, and this time, I held his gaze and kept singing. Tears formed in his eyes. Part of me wanted to look away, to not have to see his suffering, but he seemed to be someone who who was used to people turning away. I decided I would keep singing and offer him something different. I would witness his tears and hold space for them. As I did, he smiled, a faint smile, but one that said he knew he'd been seen. I smiled grateful and touched that he was willing to share his humanity with me.

When the song ended, the tea-drinking man called out, "Do you know the one Dem Bones?"

Others called out other lines to songs. We sang bits from each one as we remembered them, helping each other with words and tunes. I sang, "If you get to heaven before I do, comin' for to carrying me home, tell all them folks I'm comin' after you, comin' for to carry me home." And then we all sang the chorus together from Swing Low Sweet Chariot.

A few men walked away to get their bedding rolls ready to sleep. The volunteer coordinator had told us that the men were tired and most would go to sleep early. A few more men circled in close and then drifted away. It was as if they were coming to warm themselves by a fire before they slept. The singing began to dwindle, like a lullaby softening as a child drifts towards sleep. There were a few men left, and then there was only one--the man next to me on my left, the one who had had tears in his eyes.

He stayed until I stopped singing, and then he began talking, whispering. He told me he had hard, hard things happen in his life, things he could never tell me, and that he'd done things he wasn't proud of. He said he’d purchased a Bible and wanted to return to God, but that he had a few things he had to do first before he was good enough to go back to God.

He asked me to wait a minute, and he went to his pack and returned with his new Bible. He opened it carefully and asked me to read John 14. I didn't have my glasses so I couldn't see the text. Instead, he began quoting passages by memory, and I realized he was sharing with me his lullaby, the words he recited to himself again and again. "Do not let your hearts be troubled..." he continued in a soft, steady voice. "I am the way, and the truth, and the light." He kept talking, "Very truly, I tell you, the one who believes in me will also do the works that I do and in fact, will do greater works than these because I am going to the Father. I will do whatever you ask in my name, so that the Father may be glorified in the Son. If in my name you ask me for anything, I will do it."

He told me he had to be a better person before he could return to God, and that he was working on being a better person, and then I told him gently, and carefully, that I heard what he was saying, but that I didn't agree with him. I told him I believed he could be as he is and receive the love of God that is already here for him.

I've had this conversation with myself recently as I’ve worked to understand deeply what it means to forgive--ourselves and others. The only response I have been able to give myself that feels true to God's goodness is that I get to come as I am. It is a humble walk to show up with all of our wounds, the ones others have inflicted on us, and the ones we've inflicted on ourselves, and offer then up. It is in the offering that I believe we begin to heal and we experience grace. What I have come to understand is that I don't have to do anything or be anything to be completely worthy of God's unconditional love. That's the unconditional part of it. It's why humans are human and God is God.

He asked me if I would pray for him, and I said I would. Little did he know that in his asking and sharing, he had saved me.

As I drove home, I wiped away my own tears and felt how deeply a meal and a night of song had filled my own cup with faith, sweetness and love.